The Meaning of Altar 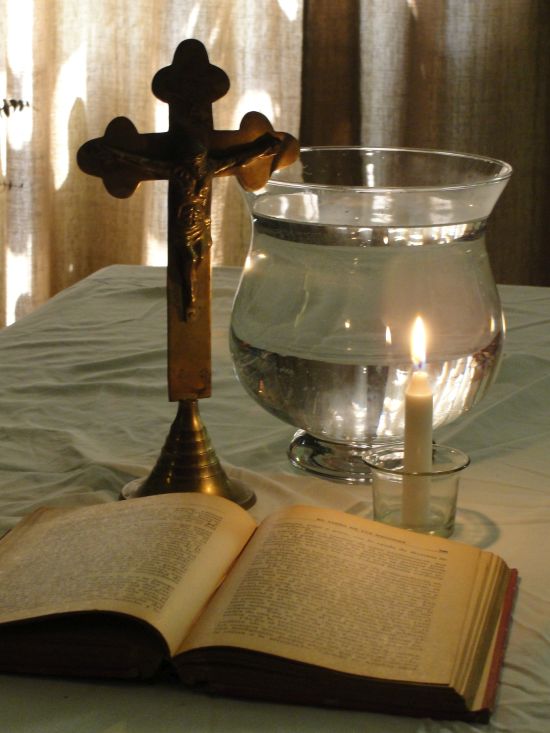 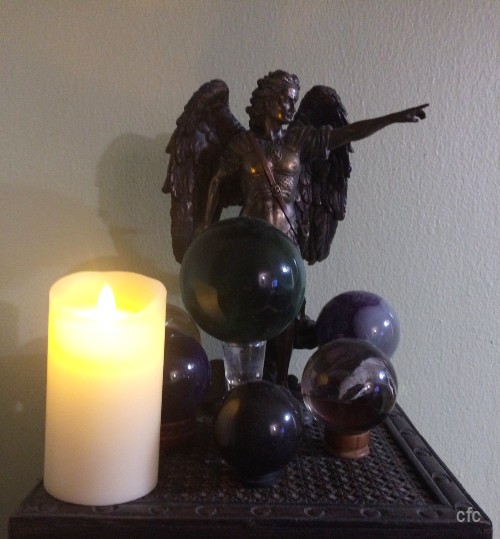 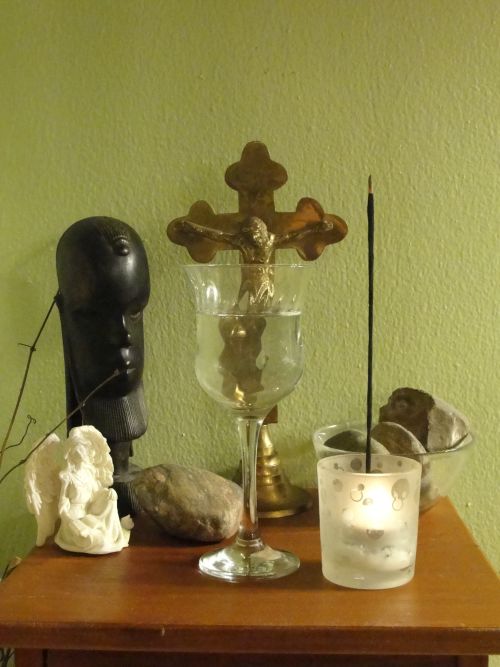 Throughout history, man has had a need to establish a connection with God. In his quest to satisfy this inner need, the concept of an altar was created.

In modern times, an altar is usually a table or chest where spiritual offerings, statues, pictures, and other symbolic items are placed upon. The purpose of an altar is to worship or connect with God and spirit guides. It is a sacred space where the person goes to meditate, pray, perform rituals or simply recharge their internal batteries.

Growing up in a spiritual community, altars were an everyday thing. I recall visiting my mother’s friends or family and seeing an altar. Some were large, while others were of a smaller scale. The purpose was the same-a connection to the spirit world.

When I reached a certain age, I created my own spiritual altar. It was just a copy of what I had seen in the past.

As I began developing spiritually and connecting to my spirit guides, a diverse way of looking at things started to unfold. With the help of a spirit guide, I could go beyond the ordinary to understand the true meaning of a spiritual altar.

Spirits explained that an altar was very personal and should reflect the essence of the person’s spiritual development, with God being the center of all. 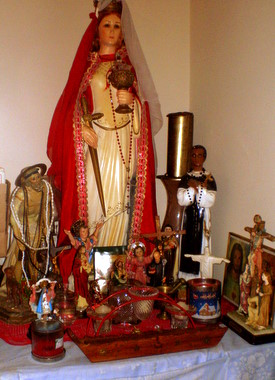 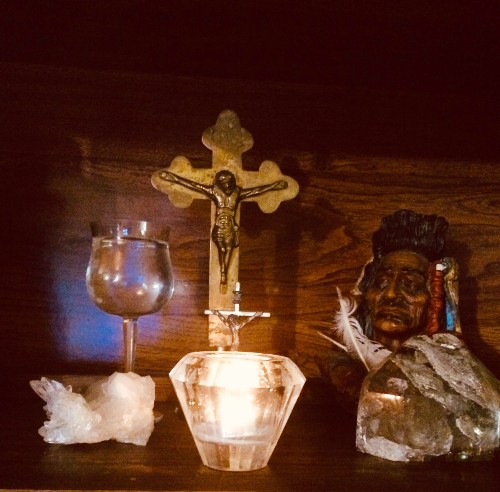 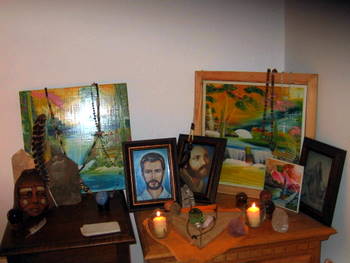 When placing an item on an altar, one should know its purpose. In addition, it is essential to become aware of the energy surrounding the altar.

Some items create a heightened level of energy, such as crystals. Certain spirits recommend having one or two crystals on the altar. However, not all altars need crystals. It all depends on what the person’s guides feel is necessary.

Some people have statues of saints on their altars. These are saints they faithfully pray to and are grateful for requests that were granted to them. 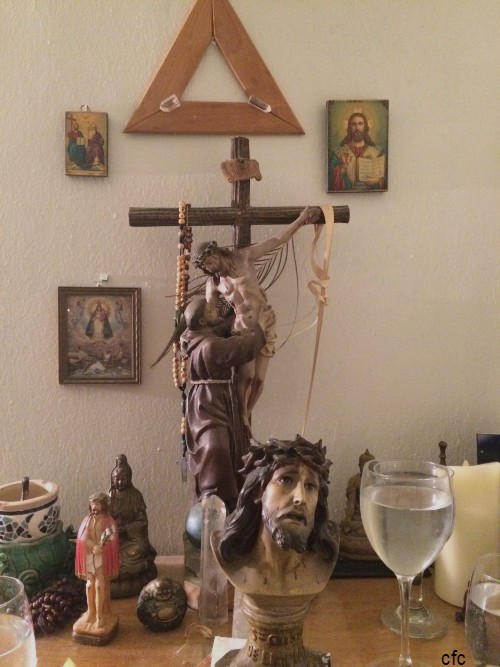 It is important to know that no saint or spirit can grant requests without the permission of God. That is why a symbol representing God should be placed in the center of the altar. 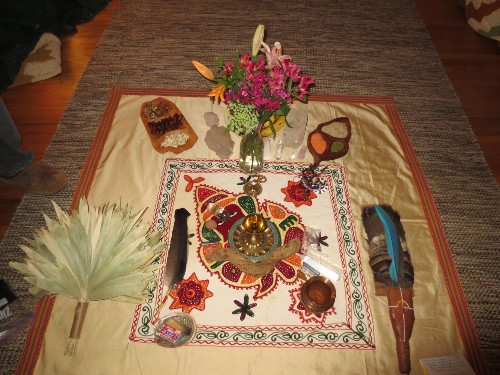 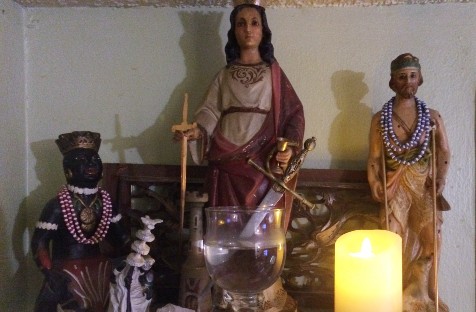 "My altar is composed of saints who have great meaning to me. They are saints whom I prayed to when I was experiencing problems. Moreover, it is the place I go to whenever I require strength. There, I can relax and see things clearly."

In Santeria, an altar is called boveda. A boveda is usually a small table with a white tablecloth over it. Seven or nine goblets of water are placed on top. The largest one is in the middle and dedicated to the person's main spirit guide.

In the book Santeria- The Religion, Megene Gonzalez-Wippler writes that practitioners of Santeria, "believe that whenever a goblet fills with air bubbles, it is an indication that there are spiritual entities- often of a negative nature- in the vicinity. The water therefore acts as a kind of spiritual cleansing and as a subtle 'trap' for impure spirits."

In Jambalaya by Luisah Teish, she gives a guideline for building a small altar. A piece of white cloth, a crystal chalice filled with water with a tablespoon of anisette, white rum, or white wine (this water is called spirit water), a white candle, four stones, and pictures of ancestors are items needed to create an altar.

In the Umbanda religion, an altar consists of the following elements-fire, earth, water, and air. Recently, while attending a Umbanda ceremony, the person in charge explained the various items on the temple's altar. There were three candles- fire element. These candles were dedicated to specific orishas. I remember one was for Oshun-Goddess of rivers and love. In front of the candles was a glass of water- water element. Water clears and takes in all negative energy. Located in front of the glass of water was a rock-earth element. Since orishas are earth spirits, having an item representing the earth is paramount. The air element is self-explanatory.

In this particular altar, extra items were placed, such as a small statue representing the principal guide of the temple, flowers, and a white solid substance similar looking to chalk. It is called cascarilla. Cascarilla is made from egg powder and used by the entities to write their names on the floor. In certain spiritual practices, cascarilla is used in many spiritual rituals.

Whatever kind of altar you have or are in the process of creating, it is important to remember that love is the main ingredient. 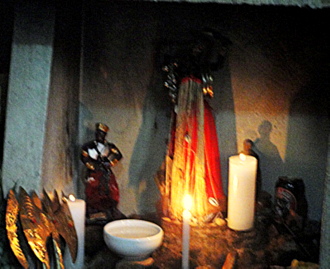 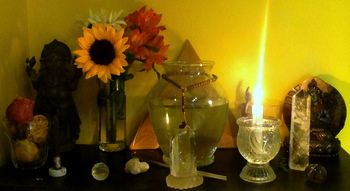