Battle Between Good and Evil
The Final Confrontation 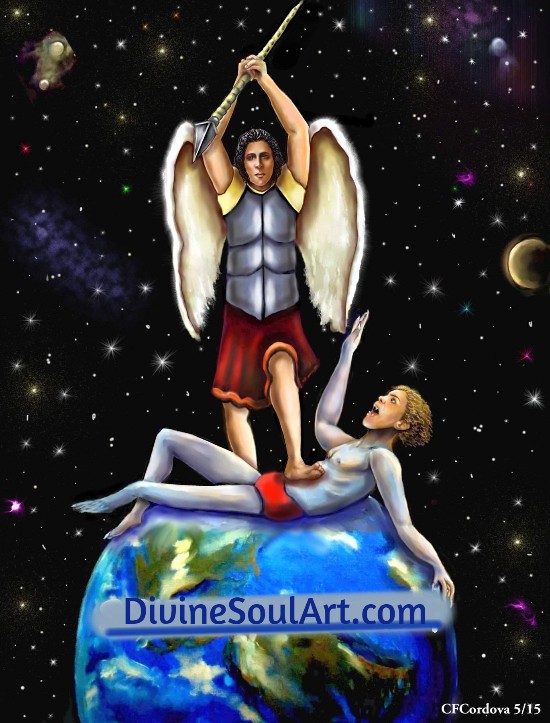 God had summoned Michael, chief commander of God's army, to discuss a matter of great importance. Upon entering the Great Hall, where God waited patiently for his arrival, Michael noticed the dismayed look on God's celestial face.

"God, you wanted to speak to me," Michael said. "Yes, my son. The final hour has come," responded God. Michael knew exactly what He was referring to. It was the time he had been waiting and preparing for. It was the final battle between good and evil.

From the beginning of time, God had been incredibly loving and patient with his earthly children. Although they had strayed from the right path on many occasions and hurt Him deeply, He always forgave and showered them with immense love.

On several occasions, He had sent messengers to Earth to convey His profound disappointment and desire to love one another.

Witnessing the high magnitude of destruction, hatred, and continuation, He had reached the limit of His tolerance. He could no longer witness His children destroying each other, seeking pleasure from others' suffering, and creating atrocities while hiding behind religious garbs or words.

He knew that Lucifer was the culprit who had been spreading the seed of hatred among his children. Although He had given man free will to select and make choices, it was evident that the majority had chosen to follow Lucifer and walk on the dark side. The hour had come to stop Lucifer and his followers.

Michael had ordered a meeting of all soldiers. He courageously spoke to the soldiers informing them of their newly assigned mission.

"My brothers, it is my duty to inform you that we will be going to Earth to fight a battle against evil. Once again, we will be confronting Lucifer. Although he was one of the greatest soldiers in God's army, he is no longer one of us. He has vowed to destroy all that is dear to God. Our job is to end his madness and restore order. Prepare to leave as soon as possible."

Meanwhile, Lucifer was preparing for the upcoming battle. It was the battle that he had been waiting for and preparing for with great anticipation. It was the moment to confront Michael, his one-time friend, and brother.

Following God's orders, Michael had stripped him of everything. He transported him here to live as an animal for eternity.

Although Earth was to be Lucifer's prison, he converted it into his Kingdom, where God's children were his subjects and slaves.

Now, the time had come. He was ready. This time his army was a thousand times bigger and stronger. He would not make the same mistake as before. He would not trust anyone. His hatred and desire for revenge made him a more determined and powerful adversary.

As he looked up to the sky, he shouted furiously, "God, you can't stop me. This is my Kingdom, and your beloved children are my slaves. So come and send your army. I am ready."

With the final hour approaching, Lucifer was relishing every moment. His venomous laughter was causing abrupt and violent vibration around the globe. Tidal waves, earthquakes, tsunamis, landslides, and floods were all the results of his joyous uproars. His dark and violent energy was felt from every corner of the globe. He had kept his promise to destroy Earth.

As for Michael, he knew that the task was not going to be easy. Lucifer had gotten stronger and unyielding in his evil ways. His endless hatred for God and desire for revenge made him a forceful opponent. His only chance of defeating him was to thrust his sword into his heart.

A roaring sound was heard as Michael, and his army approached the gates of Earth. Lucifer could see the bright divine light that surrounded them. He knew the light well. For he was once covered with the light. He detested it, and everything that pertained to God. "They are here. Get ready," Lucifer ordered his men.

Michael had arrived. He was now face to face with his one-time brother. "Once again, we meet. Give up this madness and enter the light. God loves you and will forgive you," Michael said.

Lucifer laughed. It was a laughter-filled with hate and venom. "You and God are the mad ones. I will never again give homage to God. Why should I? I am God. This is my Kingdom, and these are my slaves. Furthermore, you are trespassing. I suggest you and your puppets fly back to where you came from. You are not welcome here, my one-time brother," he stated.

Seeing that Lucifer was unrelenting, Michael pulled out his sword and swung, missing his target. There was no doubt that Lucifer had developed immense speed and strength. Lucifer, who had fingernails that were long and sharp as a blade, plunged onto Michael with brutal force, causing a deep gash on his arm.

"You thought you could come here and destroy me…no, brother…I will not make the same mistake. I will never trust a brother again. This time, I will defeat you," Lucifer shouted out with a malign look in his eyes.

Once again, Lucifer attacked Michael, but this time without causing injury. Michael was prepared this time. He had positioned himself in a combative stand, swinging his sword at Lucifer. One blow after another, his sword met his target.

Although Lucifer was struck several times, he showed no signs of being hurt. Michael needed to plunge his sword into his heart.

Michael and Lucifer continued to attack each other without any signs of defeat on either side. One blow after another, Michael struck Lucifer's body, always missing the heart.

Finally, the opportunity Michael was waiting for. Lucifer had stumbled to the ground leaving himself open and defenseless. Pinning him to the ground, Michael was about to strike the fatal blow when Lucifer managed to escape Michael's powerful grasp.

Displaying signs of being injured, Lucifer fled to a nearby cave with Michael in close pursuit.

When Michael walked into the cave, he could scarcely see inside. As he continued to step forward, a loud sound was heard. The opening of the cave had been sealed. He was standing in total darkness.

Suddenly, he felt someone standing near him. It began to speak. "Welcome, my brother. As you can see, you cannot destroy me. I am invincible." It was Lucifer. His energy felt like that of a wild beast ready for the kill. With immense fury, Lucifer struck a massive blow to Michael's face.

When Michael opened his eyes, he noticed that the cave was lit with torches, his sword was missing, and his hands were chained. In front of him was Lucifer sitting in his throne surrounded by grotesque-looking creatures. Beside him was a woman. The woman was Negativity, Lucifer longtime companion. She possessed the same bloodthirsty look in her eyes as Lucifer.

Lucifer signaled his slaves to bring Michael closer to him. "How does it feel to be defenseless and alone? Where is your God now? How can you be loyal to a God who has abandoned you- a God who shows much love to these earthly creatures and forgets those who had served and loved him? Renounce your God and show your allegiance to me, and I will be merciful. Let us be brothers once again, and walk side by side," exclaimed Lucifer.

Michael, looking directly and intently into Lucifer's eyes, began to speak. "Lucifer, you are still my brother, and I love you. Please, relinquish this madness and come home. God is waiting for you. You were once a good and noble soldier. Release the hate from your soul and free yourself. You have lived in darkness for so long that you have forgotten what it is to walk in the light. God has indeed given humans much love, but it does not mean that He loves us less. Humans are like newborns. They need to be loved and nurtured. By giving them love, God is teaching them how to love one another. Because of your misguided hate, you have tried to destroy the precious gift of love by blocking God's love from entering many hearts. Humans cannot live without love. You can torture and imprison them, but sooner or later, they will reach out to the heavens in search of God's love."

"Enough, enough...I don't want to hear another word about your God. Because you were my one-time brother, I was very patient with you. It ends now. Prepare to receive your punishment." Lucifer shouted violently.

Michael had lowered his head and closed his eyes as if praying.

"Pray all you want…Your God is not going to save you. Remember, he is too busy with his earthly children. You are dispensable, the same way I was." Lucifer said in extreme agitation.

Abruptly, an explosive sound was heard followed by a violent tremor. Rocks began falling off the walls of the cave. Cracks on the ground were starting to form- some more severe than others. Tremors upon tremors continued to cause severe damage. Each tremor was more violent than the previous one.

Panic and desperation had taken over the minds of Lucifer's slaves. The sounds of despair were heard all over. Some were desperately asking for God's forgiveness and intervention.

Attempting to regain control, Lucifer began fiercely striking his victims. "Go back, you filthy scum or I will personally see that you are severely tortured," he exclaimed.

During all the upheaval, Michael had remained in his serene posture-head lowered and eyes closed. 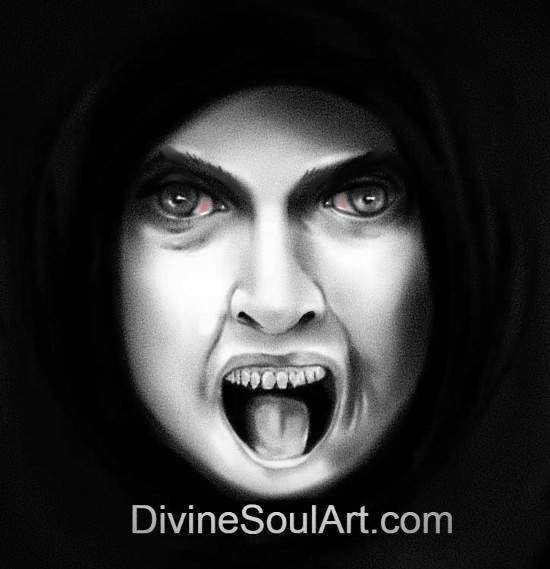 Consumed by immense anger and hate, Lucifer turned to face Michael. "This is your doing…you and your God. I'll show you who is the Master here." When raising his sword to strike the final blow, a divine luminous light appeared, impeding him from seeing his target. Besides, he was unable to move his arms.

Suddenly, a figure began to emerge from the other side of the light. It was Michael in full glory. With sword in hand, he plunged it deep into Lucifer's heart.

With a look of defeat in his eyes, Lucifer dropped his sword and began to collapse. He had fallen into a large opening in the ground caused by the tremors.

With tears in his eyes, Michael watched as Lucifer's body was consumed by a hot lava-like substance running underneath the ground. "Farewell, my brother," he whispered.

Running to the aid of her lifelong companion, Negativity met with the same fate as Lucifer.

The battle was over. Lucifer and all of his followers had been destroyed. It was time to go home.

As Michael and his army ascended slowly to the heavens, he could see how the Earth's soil devoured everything evil. The negative energy circling the Earth's atmosphere was evaporating. Once submerged in deep darkness, Earth was now being showered by an infinite brilliant light. Survivors were emerging from their hidden shelters and gravitating towards the six central locations around the globe. These were the designated areas where civilization would commence again. One again, Earth would experience a new beginning.

End of Battle Between Good and Evil 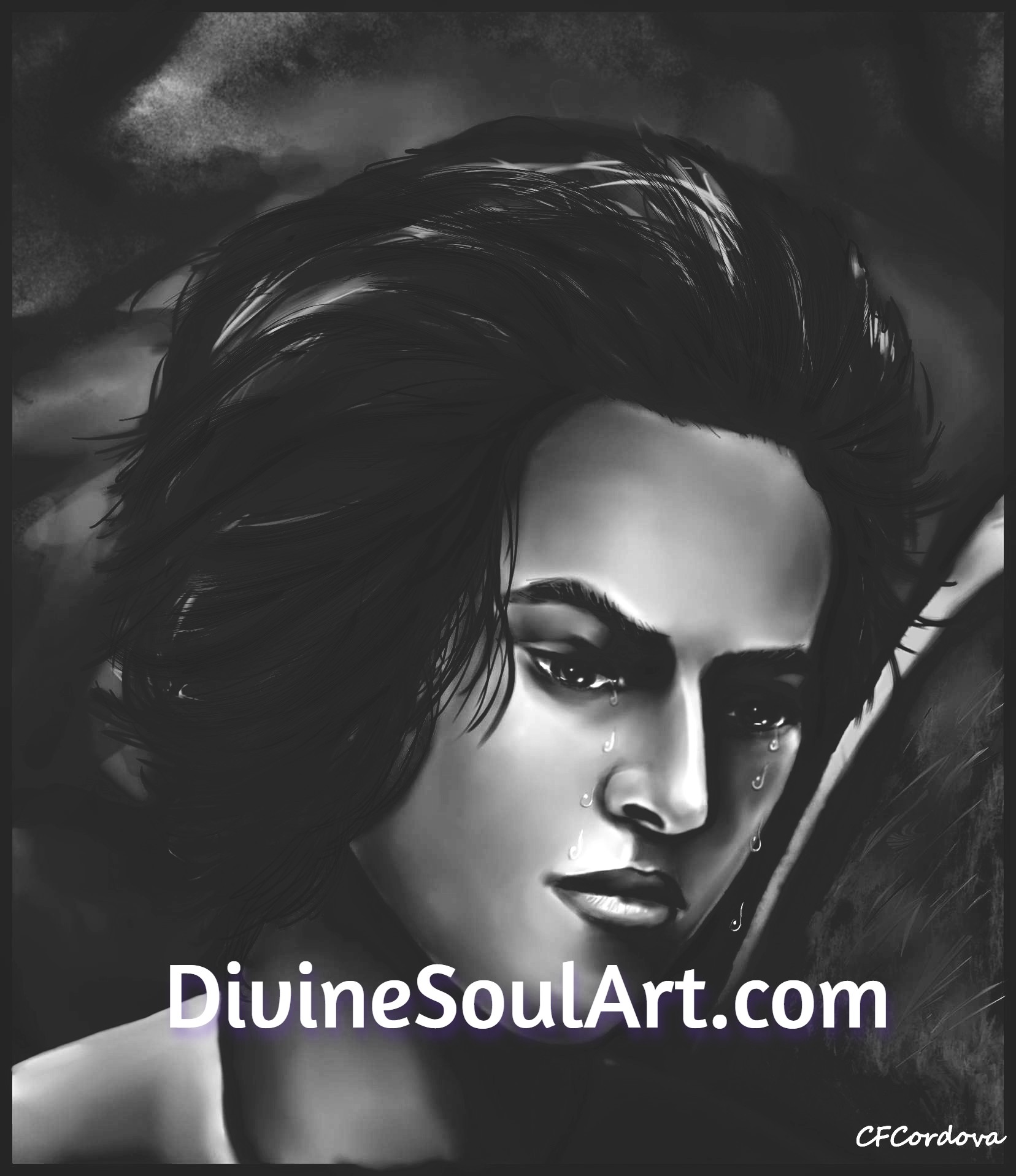 St. Michael the Archangel, defend us in our day of battle; protect us against the deceit and wickedness of the devil. May God rebuke him, we humbly pray.

And you, O prince of the heavenly host, by the power of God banish into hell Satan and all of the evil spirits who roam through the world seeking the ruin of souls.

Archangel Michael, pray for us.