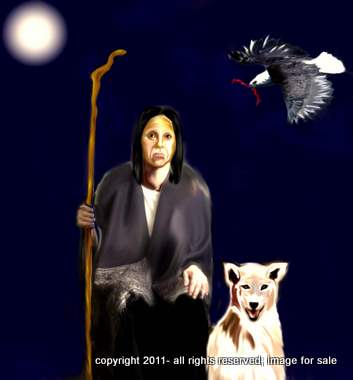 It was a beautiful summer day, and I was heading to see a Shaman. What was I getting myself into? I had no clue.

I had read an article on the Shaman, and felt a strong impulse to see him. Since it was my first time visiting a Shaman, I did not know what to expect. I was ten percent nervous and ninety percent curious.

As I came out of the subway and walked slowly towards the address of the Shaman, my thoughts began jumping from one thing to another. “What is going to happen?…what kind of a person is he?…will his guides connect with me?” These and other questions kept entering my mind.

At the designated time, I rang the bell. A white, middle-aged man with a pleasant smile opened the door. "Hello...come in and have a seat," he said. As I sat down on a couch, my eyes began inspecting the area. It was a small space with various spiritual items spread around the room. Near the windows were a table and two chairs. On top of the table were stones, flowers, and other items, which I don't recall at the moment.

After a brief introduction, he told me to sit on one of the chairs near the window. He then gave me a candle and said, "Take this candle, rub it around your body and pray for all problems and negative energy to be transmitted to the candle." I closed my eyes and did exactly what he told me. When I finished, I handed him the candle. He lit the candle and proceeded to do a candle reading.

Although the reading did not impress me, I enjoyed the interaction. It was very amicable. By the end of the reading, we were exchanging information concerning various aspects of certain religious beliefs.

Suddenly, he looked at me and said, “Do you want to do the spiritual cleansing?”

“Is the Pope Catholic? Is there tea in China?” I said to myself. What a ridiculous question. Of course, I wanted the spiritual cleansing. It was the main reason why I was there.

He instructed me to stand in the middle of the room. Then, he gave me two stones- one for each hand. I held them tightly, closed my eyes, and proceeded to pray.

As I continued praying, I felt the Shaman spraying a liquid over my body. I believe it was rum, but I am not sure. After spraying me, he began chanting as if calling on the Divine Energy.

Suddenly, I began to have a dream-like vision. I saw a middle-aged man of medium stature moving around me in a circle. Just like the Shaman, he was speaking in a foreign tongue. As he moved around me, he kept shaking a rattle and chanting. Out of nowhere, a snake appeared. It approached my feet and moved slowly up my body. When it reached my head, it continued to move up into the air in the direction of the man. Grabbing the snake, it transformed into a staff. The man held it tightly and placed it down. Next to the man was a wolf sitting and observing patiently. Then, a large bird appeared. It went to the top of my head, seized a red ribbon, and flew away.

When the vision was over, I heard the Shaman calling me. He took away the two stones and gave me another one. “Here, take this stone and keep it close to your body,” he said. I placed it close to my stomach area and held it firmly. My hands and legs started shaking as he started chanting. The energy I felt was very powerful.

When the cleansing was over, I felt peaceful and satisfied. Taking a few minutes to get my thoughts together, the Shaman gave me some water. As I was getting ready to leave, we hugged each other and said our farewells.

As I walked towards the train station, my mind was a complete blank. I could not process what had happened to me. That evening nothing extraordinary occurred.

The next day, the unexpected happened. I was visited by spirit. In a dream-like state, I saw myself resting on a bed. A man appeared and sat next to me. He was the same man or spirit I had seen the day before during the cleansing. He smiled and commenced to reveal facts about the spiritual cleansing. Although he was not communicating verbally, his thoughts were apparent to me.

He stated that he was the same spirit that had appeared the day before. In fact, his energy directed me to the Shaman. To understand his energy, it was vital for me to see, feel and experience it.

The ceremony consisted of calling upon the Divine Creator to allow higher-ranking spirits to descend and fill the area with their energy. The shaking of the rattle, the chanting, and moving in circular form were all part of the calling process.

Furthermore, he stated that the snake represented the spirit of extraction. It was used to remove unwanted energy. As it moved slowly up the body, it was releasing negative energy and taking it to the top. When it detached itself from the body, it had removed all of the negative energy from my body. It then transformed into a staff.

The wolf represented the spirit of protection. Its mission was to protect and guard the medium as well as the receiver from all negative energy.

The large bird, which was an eagle, represented the spirit in charge of taking away and discarding negative energy to another dimension.

Reaching the end of his explanation, he smiled and assured me that things were going to be okay.

Immediately, I woke up feeling a sense of inner peace. Remember, if you have a strong inclination to do something or if spirits of light move you into a specific direction, go for it. You never know what is on the other side of the rainbow.

There is a reason for all things in life.

End -What is Shamanism ?