Lucifer
Dark Angel
The Love Story of Lucifer and Negativity 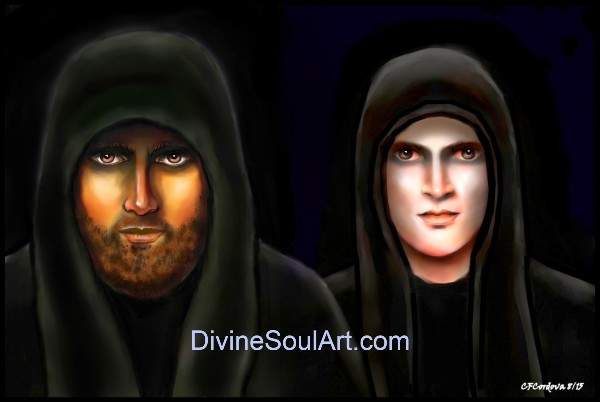 Love Story of Lucifer and Negativity

In God’s Kingdom, there lived three sisters. They were called Faith, Hope and Negativity. The sisters were pristine, angelic beings, who were known for their beauty, loyalty, optimism, goodness, and immense love for all. They were God’s perfect creation. Their lives were undisturbed until a stranger appeared and created a shift in the overall behavior of one of the sisters. It was the beginning of the destruction of perfection.

While sitting outside her home contemplating the beauty around her, Negativity, the youngest of the three sisters, was approached by a young handsome soldier. He had been admiring her beauty from afar, and could not resist the temptation to speak to her. When he approached her, he was overwhelmed by her beauty. "She is truly beautiful," he thought to himself.

“Hello, I am so sorry to disturb you. I hope you don’t mind, but I needed to say hello. My name is Lucifer, and I am a soldier in God’s army,” he said.

Surprised by the encounter, Negativity was momentarily speechless. Regaining her composure, she shyly responded, “Oh, no…you are not disturbing me. Hello, my name is Negativity.”

Soon, they were engaged in a brief conversation. After a few minutes, Lucifer excused himself, but promised to return the next day.

Negativity rushed home feeling a strange, but wonderful sensation inside her. Not experienced in love matters, she could not understand what was happening to her. She had met the most handsome and charming man and could not stop thinking of him. She continuously replayed their brief encounter. That night she could not fall asleep. She could think only of Lucifer and their next encounter.

The following morning, Negativity got up early and headed to the place where she first saw him. He was there waiting for her. Day after day, they met at the same place and talked for hours. Immediately, they fell in love.

Although Negativity wanted to share her joy with everyone, Lucifer thought it was best to wait until his return. He received immediate orders to return to duty. He promised to return and make her his wife.

On the day of his departure, Negativity felt an immense pain in her heart. It was as if part of her heart had stopped beating or died. This was something she never experienced before. Even though her sadness was great, the thought of his return and becoming his wife kept her alive.

One day, a traveler informed the sisters that a revolt in the Kingdom had taken place. One of God’s high-ranking soldiers had assembled a small group of soldiers and tried to take the throne by force. They were defeated and exiled to a far away planet. The leader of the group was a man called Lucifer.

Upon hearing the news, Negativity fell to her knees and began to cry. “This can’t be happening… not Lucifer…no, no, no,” she said in desperation. For days, she remained locked in her room crying. She lost the only man she ever loved.

Concerned about their sister’s well-being, Faith and Hope tried everything in their power to help her, but to no avail. She was despondent. As time passed, the sisters noticed that Negativity was becoming gloomy and vile. The once loving, angelic being had turned into an unrecognizable individual. For months, she lived in darkness refusing to leave her room.

One day, while Faith and Hope were attending their garden, they heard a far away sound. It was the sound of weeping, desperation and anguish. “Where was it coming from?" they wondered. They were informed that the cries were coming from a relatively new planet called Earth. Overwhelmed with the suffering of others, the sisters decided to ask permission to go to Earth and assist the needy.

When permission was granted, Faith and Hope decided to include Negativity. They felt it was the perfect solution to get her out of her present state of mind. When she was approached with the idea, she yelled at her sisters and told them to get out. All she wanted was to be left alone with her pain. However, after rethinking her sisters’ offer, she realized it was the perfect opportunity. The opportunity to search for the man she loved.

When the sisters arrived, Earth appeared to be in shambles. There was havoc everywhere. They witnessed slavery, hunger, emotional suffering, annihilation of human beings, greed and much more. The list was enormous. People lacked faith and hope. They were empty souls who no longer believed in God, themselves or others. Although the job was massive, Faith and Hope felt it was not impossible.

Negativity, who did not share her sisters’ concerns, secretly began formulating her personal agenda. Her plan was to detach herself from her sisters and commence the search for Lucifer. Even though she did not know where he had been exiled to, she felt deep inside that he was near.

Negativity approached her sisters and told them that she wished to go out alone and assist the needy. At first, they refused to let her go. However, after evaluating the situation and magnitude of their mission, they felt that perhaps she was right. By allowing her to go on her own, they would be able to cover more territory and help more people. Her plan worked. She was free to search for Lucifer.

Days turned into weeks, and weeks turned into months. Still, no sight of Lucifer. “Was I wrong? Could it be that he is not here on Earth? Where can he be?” she would ask herself. She continued her search unmoved by the misery and pain of those around her. She was on a mission, and nothing and no one was going to distract her.

Then one day, as she roamed the streets of an unknown town, she heard a voice calling her name. As she turned around to see who it was, she noticed a shadowy figure standing behind her. Not recognizing the individual, she wondered how he knew her name. “How do you know my name? I am trying to find someone...can you help me?" she asked the stranger.

The man stood still admiring her beauty, and with a smile said, “You are more beautiful now than before. Don’t you recognize me anymore? How quickly you have forgotten me.” At that point, she felt a chill all over her body.

"Is it really you, Lucifer?” she said with excitement. Yes, it was he. The man she loved and searched for endlessly. He was standing next to her. She could not believe it. Her search ceased.

Lucifer was very pleased to see her. He told her how much he missed her, and apologized for not keeping his promise to her. Due to certain circumstances, he was unable to do so. Then, he proceeded to explain all the details of his fall from the Heavens.

"Things were not going well in God’s kingdom. God was placing too much attention on the needs of the inhabitants from other planets and neglecting those of his Kingdom. God was no longer the Almighty God. He had turned weak. He was no longer competent to rule the Kingdom," Lucifer stated. He resented it, and needed to put an end to it. He decided to assemble a small army and attack. Everything was going as planned until a close friend betrayed him. A soldier called Michael.

Michael was like a brother to him. He never thought that he would pick up a sword and fight against him. Michael was the one who captured him and brought him here.

"I have made a vow to destroy Earth little by little...inch by inch. I will create destruction and havoc everywhere, and see to it that God’s beloved children turn their backs on him and detest him fully. I will guide them to a path of destruction, greed, hate and misery. I swear to this," he exclaimed with much rage. He had become the Angel of Darkness.

As Negativity listened attentively, she noticed that Lucifer had not only changed physically, but mentally, as well. He was no longer the man of gentle words. Compassion, forgiveness and loyalty were no longer part of his vocabulary. Words such as revenge, hate and destruction dominated his thoughts.

As for his physique, he looked older, thinner and pale. His eyes were full of hate, and the wonderful smile he possessed so long ago was no longer visible.

After listening to Lucifer’s story, Negativity was convinced that he was a victim. She blamed God for Lucifer's drastic change and all his mishaps. God took everything away from him and turned him into a bitter and angry being. She understood and felt his anguish. Her love for him was stronger than before. At that moment, she vowed to follow him, and make his crusade hers.

From that day, Lucifer Dark Angel and Negativity have been inseparable. They roam the world in search of new victims. She sits quietly and waits for the perfect moment to spread her destructive and poisonous seed into the minds as well as the souls of God’s children. She is known to be the mother of depression, self-hate, bigotry, and much more. She preys on the poor, sick, feeble as well as the rich and powerful.

Although Negativity has not seen her sisters since the day she left in search for Lucifer, she is in constant conflict with them. She considers them her enemies and tries to destroy or undo their work.

Faith and Hope continue to work endlessly bringing faith and hope to all those in need. They are hopeful that one day their sister will enter the light and become the loving and angelic being she once was. They wait patiently for her return.

Their advice to all of us is to keep the faith and hope alive inside of us, avoid being part of the Beelzebub's plan, and become part of the solution- to love God, self and one another now and always.

God,  keep away the Lucifer Dark Angel and Negativity from us, and protect us from all evil thoughts and acts against us.

Lucifer Dark Angel ,Keep away from me

Lucifer Dark Angel ,I am a child of God

Lucifer Dark Angel,I have only one Master and that is God

These spiritual books are riveting, action-pack, vivid and highly readable adventure that will captivate the readers’ attention. In Spiritual Journey, you will be able to travel with the author on her spiritual journey as she explores the various spiritual practices around the globe; in Spiritual Tales, you will witness the transformation of the characters while the depth of the spiritual messages given by spirits unfolds.

If you love inspirational and thought provoking stories, you will enjoy these books. Don’t wait any longer and purchase these books. Join the adventure and enjoy the artwork created by the author that gives more life and meaning to each story.